Armstrong: ‘Does it Always Rain Here?’ 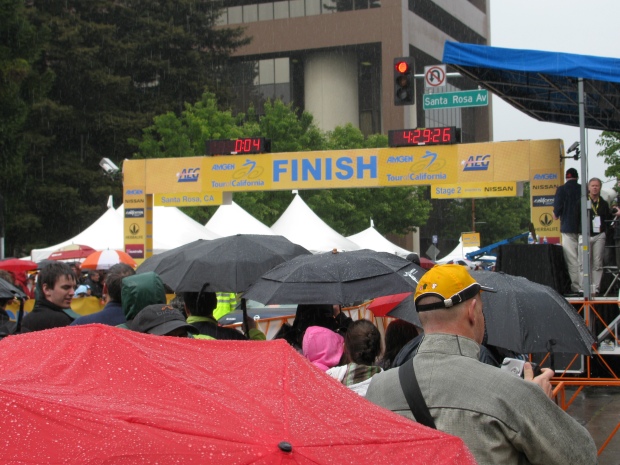 No, in fact, it doesn’t.  This local news headline came from none other than Lance Armstrong in response to Monday’s chilly rainfall over the Amgen Tour of California bicycle race. The 110-mile second stage of the race drenched cyclists through a tour of Sonoma County in cold and unrelenting rain over four intense climbs.  But the wet weather did not keep TLCD race fans away; a few staff members bundled up to cheer the racers across the downtown finish line.  Santa Rosa resident and three-time defending champion Levi Leipheimer finished in the main group and is in 12th place overall. He is 10 seconds behind new race leader Brett Lancaster with six days of racing remaining.

Although the weather did not cooperate with the Amgen race schedule, Santa Rosa is still an enthusiastic host of this race.  “The national exposure for Santa Rosa and Sonoma County is phenomenal,” said Mayor Susan Gorin.  In the days to come, Santa Rosa will continue to buzz about the race and will keep up hope that Team Radio Shack (including Lance Armstrong and Levi Leipheimer) will take the lead.

For those who missed the exciting ending to yesterday’s race, watch the video here: