Mark “the Vineman” Adams Competes in the 70.3 Triathlon 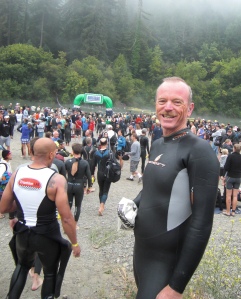 Our very own Mark Adams competed in all 3 legs of the Vineman 70.3 Triathlon on July 17th. The event was comprised of a 1.2 mile swim which took place at Johnson’s Beach in Guerneville, followed by a 56 mile bike route through wine country… and ended with a 13 mile run from Windsor High School to La Crema Winery and back again to Windsor High (whew… I’m tired just writing about this)!

Mark said the hardest part of the race was the 13 mile run. It was the last leg of the event, in 90 degree heat and he hit the wall when he arrived at the half way point at La Crema Winery. With several breaks, loads of Tums and Gatorade, he was able to finish the race in a respectable 7 hours, 4 minutes and 2 seconds. When asked if he would do the race again he said, “If you asked me that the day of the race, I’d have said no way… but I’m coming around as I heal”.

Some of the highlights from race day were seeing an 80 year old woman compete, a blind competitor who completed all 3 legs of the event, and the incredible spirit and positive influence of all the volunteers. “There was lots of humor throughout the day which made this a truly enjoyable experience” said Mark. 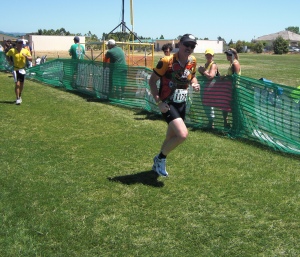 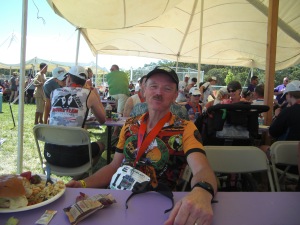