Get ready World….you’re about to change.

Recently, Carl, Phil and I watched a webinar about cloud rendering in Revit. I had seen this process emerge some months back and Carl and I briefly took a look at it. However, we quickly discovered a major drawback of not being able to use custom textures in the cloud. Out of the box texture mapping usually results in less than adequate representation of your design. Well guess what… you now can incorporate as many custom textures and material assets as you’d like!

Revit has been one of the slowest rendering engines out there, but I’ve always been impressed with its capabilities when it came to doing interior rendering for a native program. Time is a major factor in our business, and slow is a “no go”. A 12-20 hour rendering is not an uncommon thing with geometry heavy models, even with a render farm. Now with cloud rendering, we can send multiple views and let the magic and speed of the cloud to do its thing, while we keep working. An important thing to note is that renderings are vital for developing and sharing designs. Architects want to get their clients “into” the design, and a rendering can be great at starting to describe the space. Here’s the cool part, with Autodesk’s Cloud Rendering we are able to literally put the viewer in the space. It’s called stereo panorama (more about it here) and it’s transforming the way we use Revit with new levels of workflow for developing and sharing designs on the fly, not only with clients, but with each other.

I decided to give it a go and developed several views of 3d panoramas of a current office interior design. I had less than 6 hours for developing the scene materials, lighting and final render time, and little room for production time. I was able to fire off multiple draft renders during the process and keep working the scene similar to our backburner setup for 3dsmax. This was during normal work hours though so backburner was unavailable. Normally this type of work would have been rendered over a weekend but that was not the goal of the exercise. Once I had the developed views uploaded in the cloud, I had Autodesk sprinkle some magic over the top of them. Here’s where we take it up a few more notches, by pairing Cloud Rendering with a couple of iphones and pieces of cardboard, suddenly we were immersing the whole office into the design. You can stand and look all the way around you, with total freedom – and with your body rather than a computer mouse. Amazing! 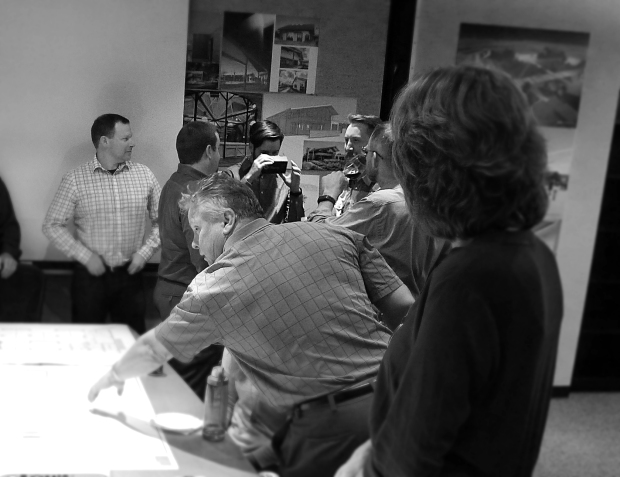 “Holy %&$#” was the phrase we heard from most of the office as first time viewers stood up to put on the goggles. It’s an amazing experience to witness the effect of going from sharing a 2D floor plan to actually putting people in the space. We are very excited  for this new design horizon and you can bet TLCD Architecture is going to keep pushing it’s abilities and usability. We look forward to what Autodesk might throw our way in the near future…3D walkthroughs maybe? Who knows, but TLCD is ready and excited for what might be brewing.